This board was in poor condition on my scrap pile, it was thick with dust and had the writing "˜doesn't work". I suspected it was GunSmoke.

I cleaned it up a bit with a soft brush. I noticed it was missing a crystal and a volume pot.

I replaced the crystal 12MHz at K1 (as its marked on my board) on the top board and fired it up. The display was pretty much garbage but I could just make out the wanted posters, which confirmed it was GunSmoke and it was running.

I popped out the ROMs on the top board and there were no broken or bent pins. I cleaned the legs & reseated them then replaced the volume pot also. To my great surprise it came up clean as a whistle and with sound! Except all character graphics were missing.

I then cleaned & reseated the ROMs on the bottom board with no improvement. I suspected the RAM on this board. After piggybacking all the 2116-10s and a little more tinkering I spotted the 6148s and piggybacked the 6148 & 55 at C5. This brought up the character graphics, but part of each graphic was still missing. Replacing the 6148 at D6 brought up the rest but the colours were incorrect. The 6148 at G6 fixed half the colours & the one at C6 finally fixed all the Graphics.

In short, I removed, socketed and replaced the four 6148-55s on the bottom board.

Got a 100% Gunsmoke now not bad as I was about to start ripping parts off it!

Notes: The Dip numbers are reversed 8=1, 7=2 etc. There doesnâ€™t seem to be any flip screen option.

One of the boards that Quinny found in a box out for hard rubbish in WA was a Gun Smoke bootleg, and like most of the boards in that stash was in pretty good physical shape. 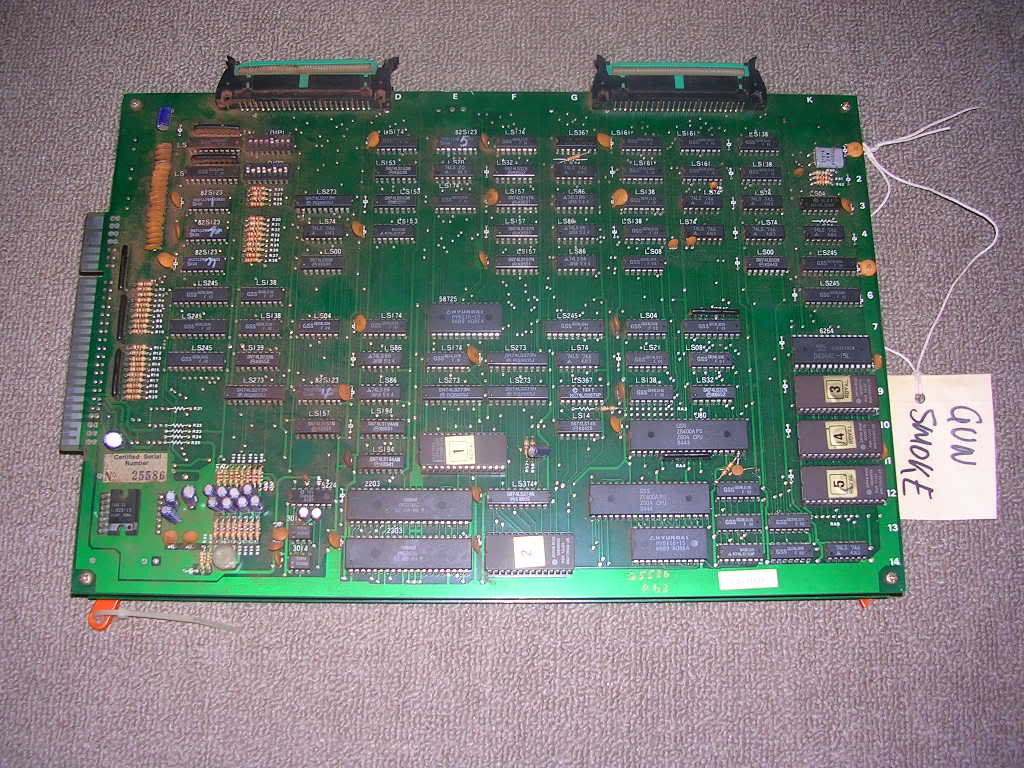 However it is always a risk with Capcom boards pre-CPS1 (and the equivalent bootlegs) that someone has plugged it into a JAMMA harness at some stage. The edge connector looks like JAMMA, and fits perfectly, but Capcoms from this era had a variety of pinouts most of which look like JAMMA but are different enough to cause major damage if plugged into one. This board had a Capcom Classic pinout, which thankfully I already had made an adaptor for when I was fixing Legendary Wings and on powering up I got this.. 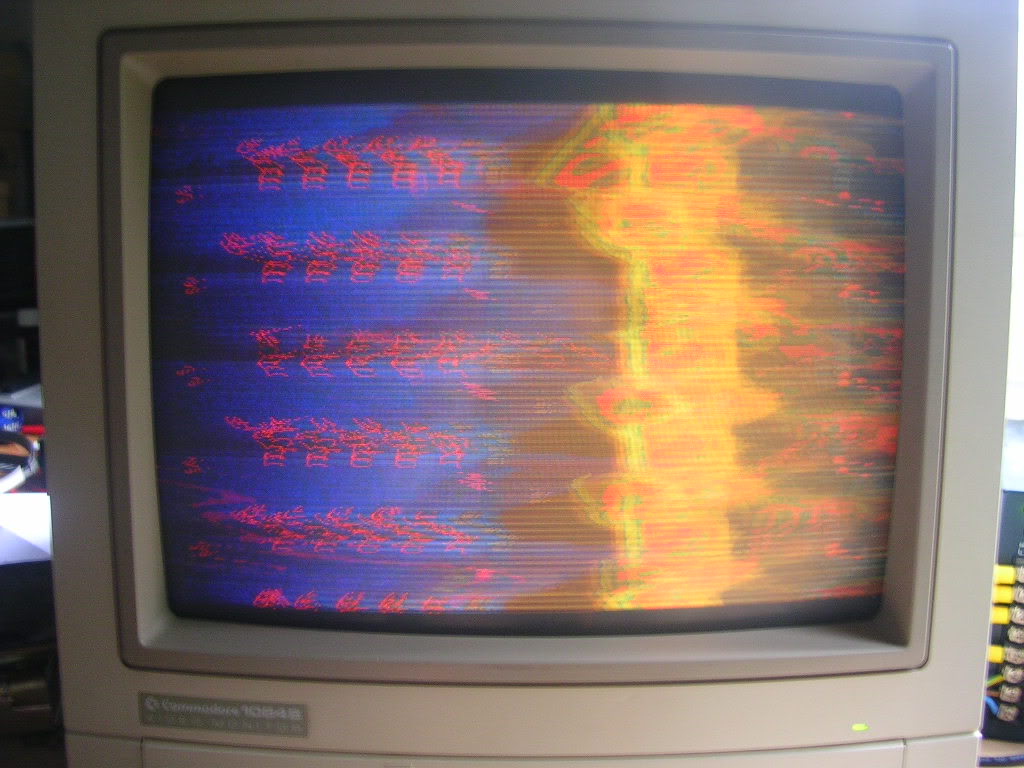 ... it looks horrendous but it is a simple fault, the video ground is missing. Some people assume this is a sync issue when faced with it but you can see the signs of bits of the game you recognise running in amongst the mess which you don't get when you are missing sync, the colours too are a give away, it has a dark oily look too it. What you see here is the title screen of the game sans video ground.

My adaptor had video ground wired in correctly, and I cured the fault by bridging video ground to common ground on the board. A closer inspection of the PCB showed that the video ground trace went nowhere, it never had, probably a design fault when the board was made, one that had to be corrected in the original cab wiring I suppose. So I fitted a link wire to connect the dead end track to ground and re-powered the board... 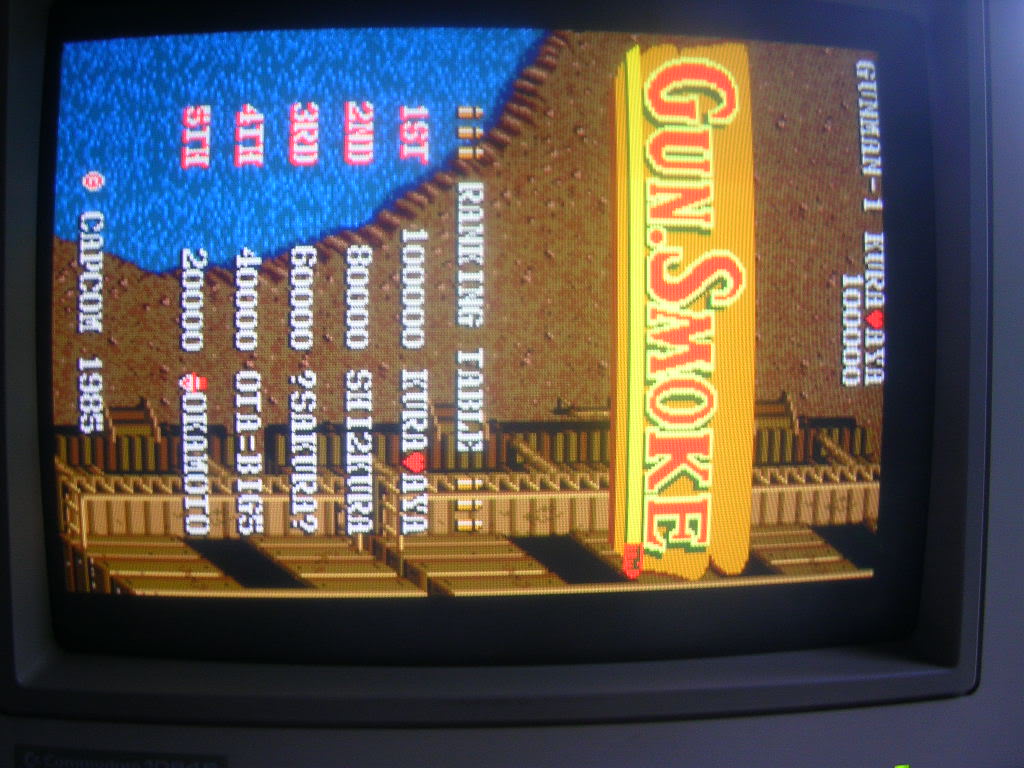 ... result! The game ran fine but the sprites were not all there, they had lines through them and parts of barrels would flick around the screen. 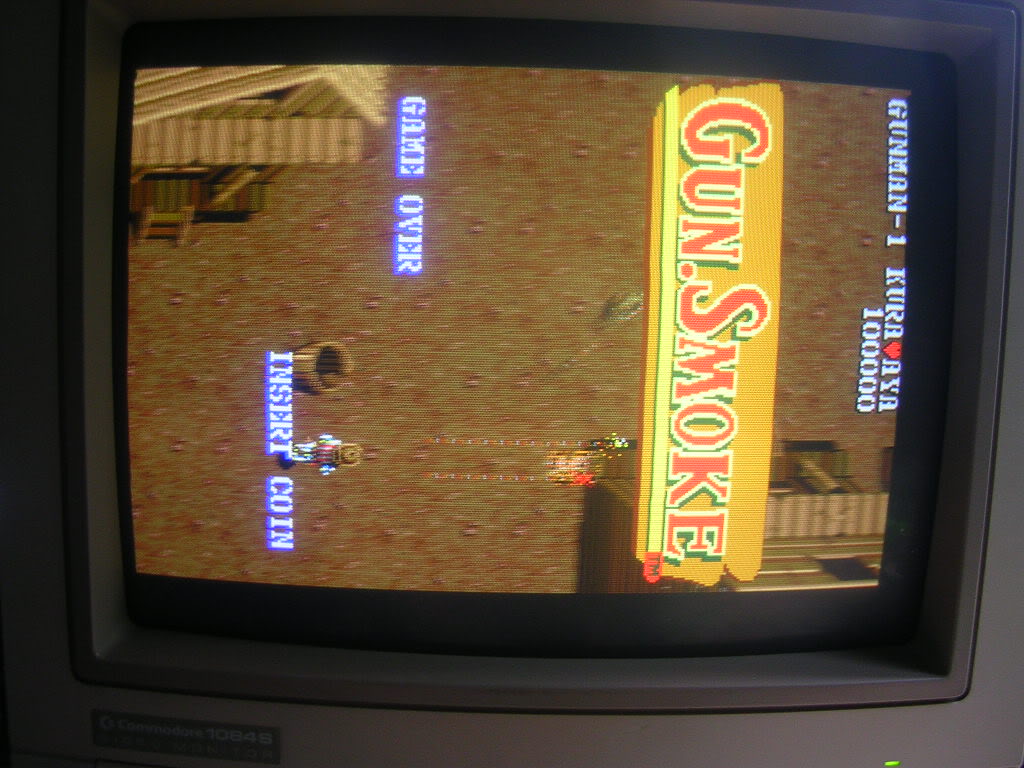 Its hard to photograph clearly when the character is dashing around, but its very clear when he is dead and lying on the ground... 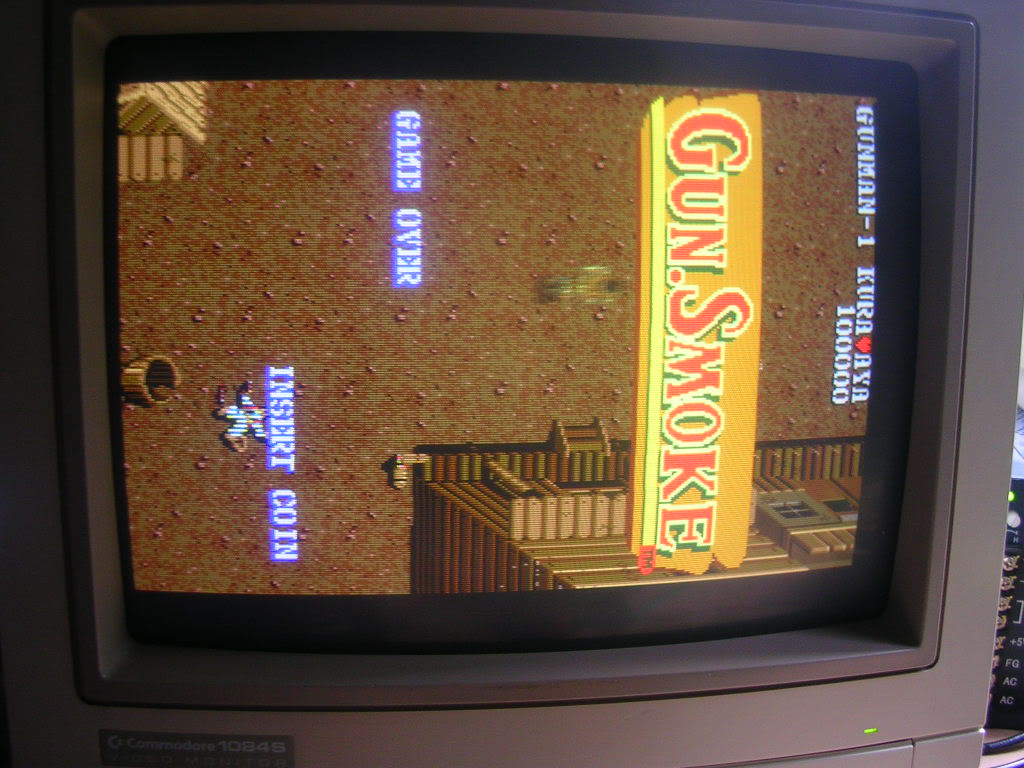 The sprites are generated on the lower video board and the most likely suspect as there were no Fujitsu TTLs was the SRAM. I probably would advise people to dump the ROMs first but all ROMs on this board were EPROMs which tend to be far more resilient than and mask ROMs and I couldn't be bothered . Someone had already replaced one of the 4 2148 SRAMs on the board but even the originals were a mish-mash of types... 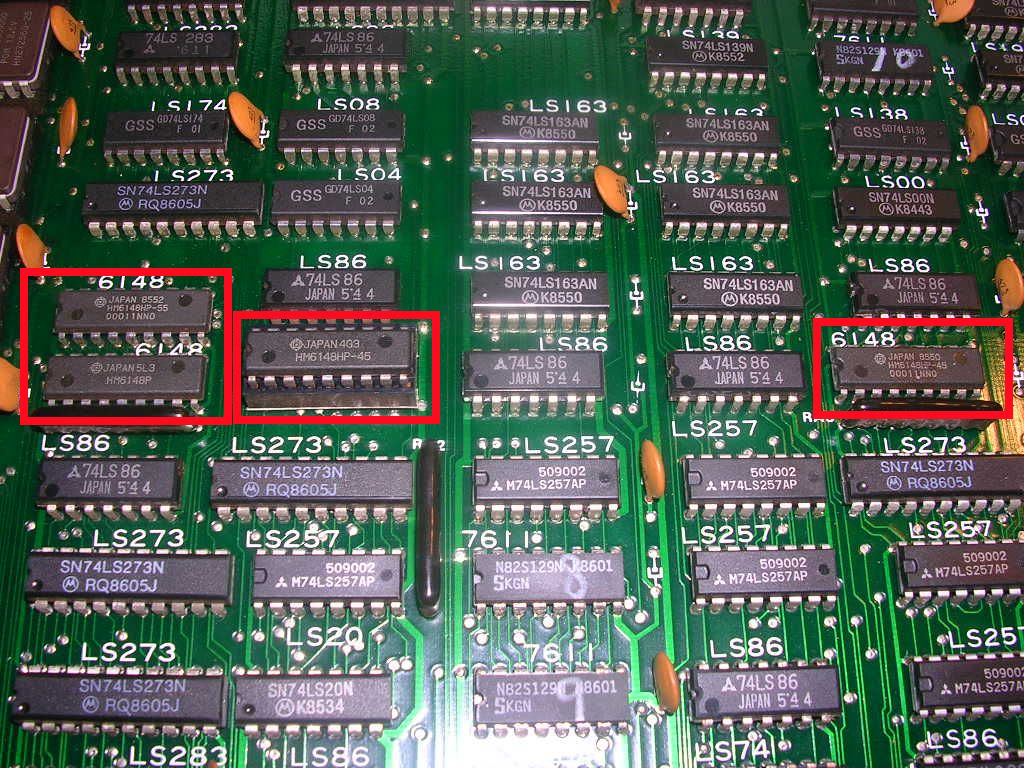 ... and pulling that out of its socket blew even cleaner lines through the sprites, so the other 3 were my first suspects. I went round the remaining three piggy-backing an equivalent chip salvaged from a wrecked sega board and on the 3rd chip the fault vanished... 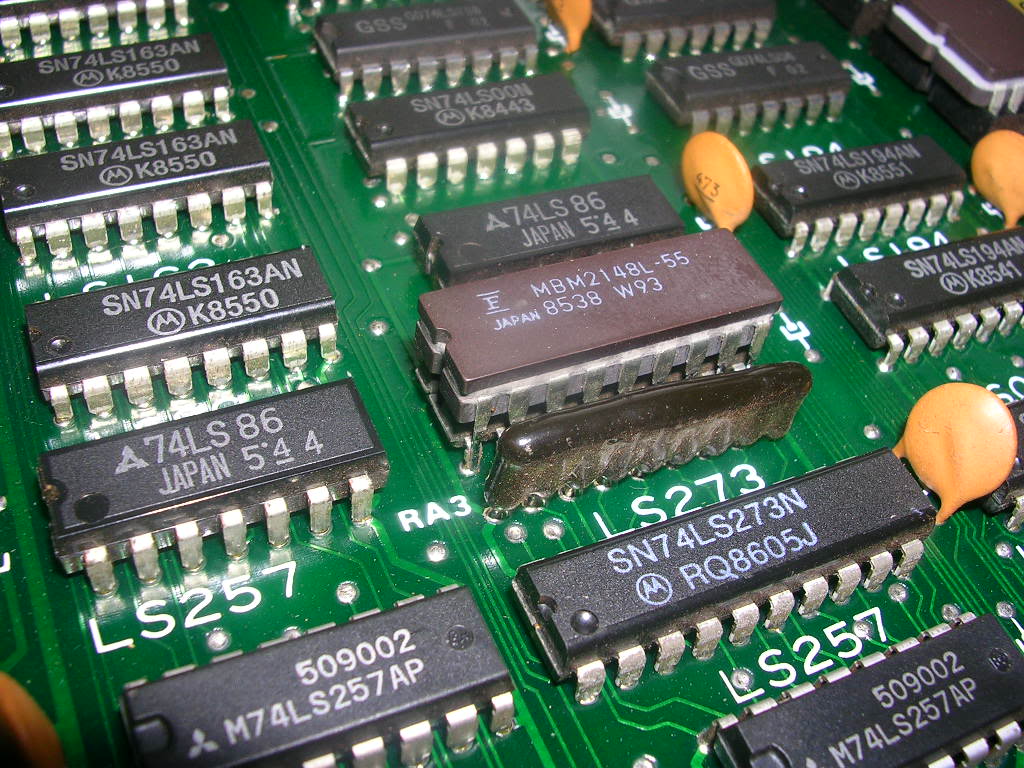 On close inspection of the original chip at this location there is hairline split in the chip body and faint discolouration around it... 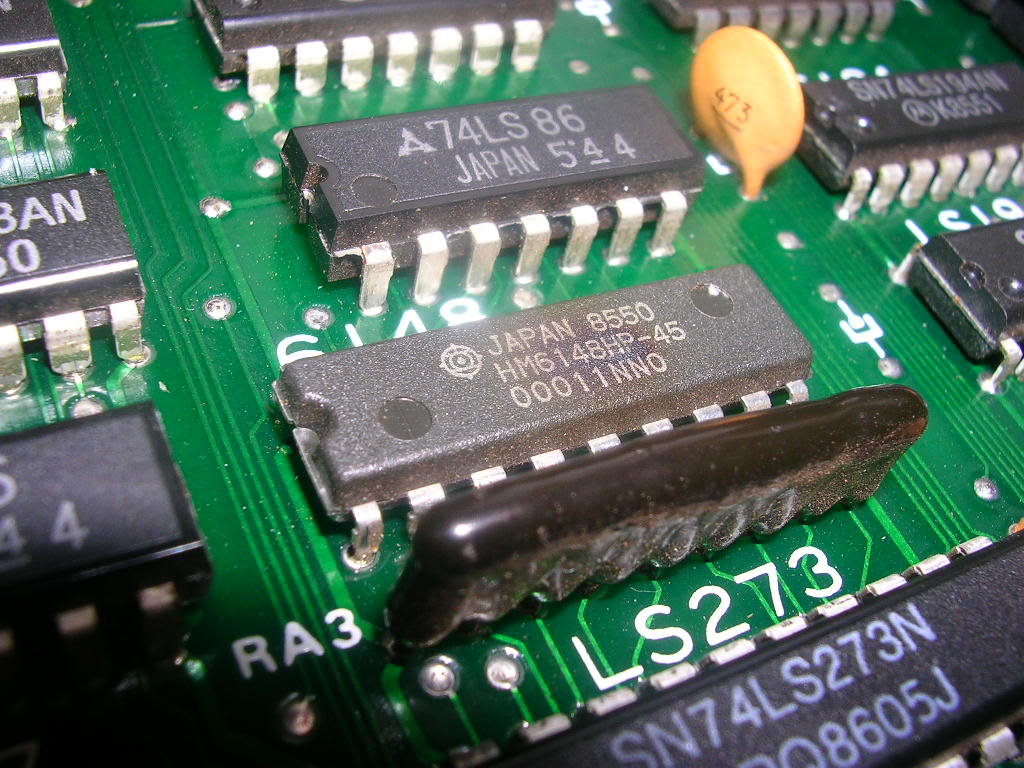 ... which is where I am guessing the magic smoke escaped at some point. Anyway, old chip comes out... 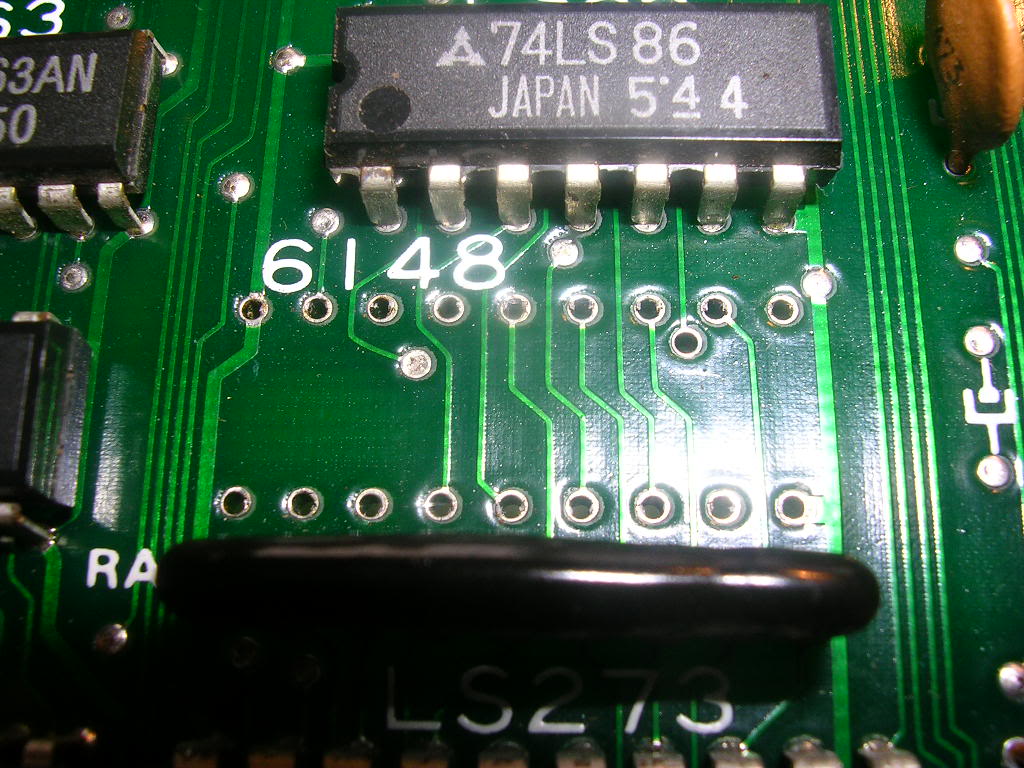 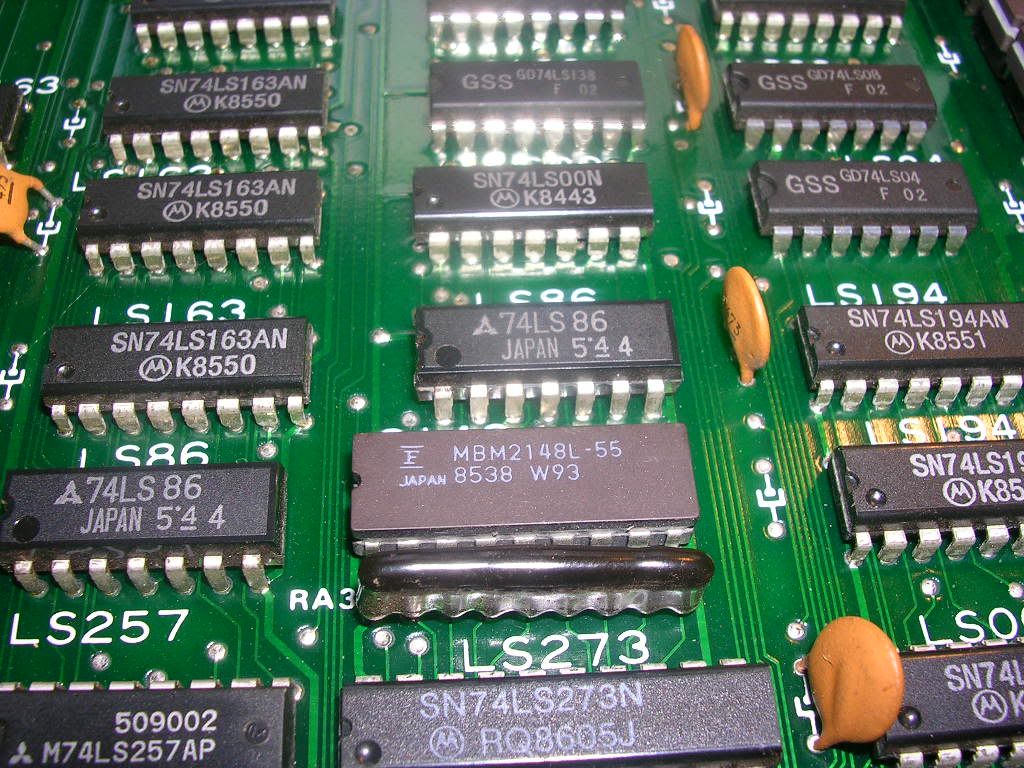 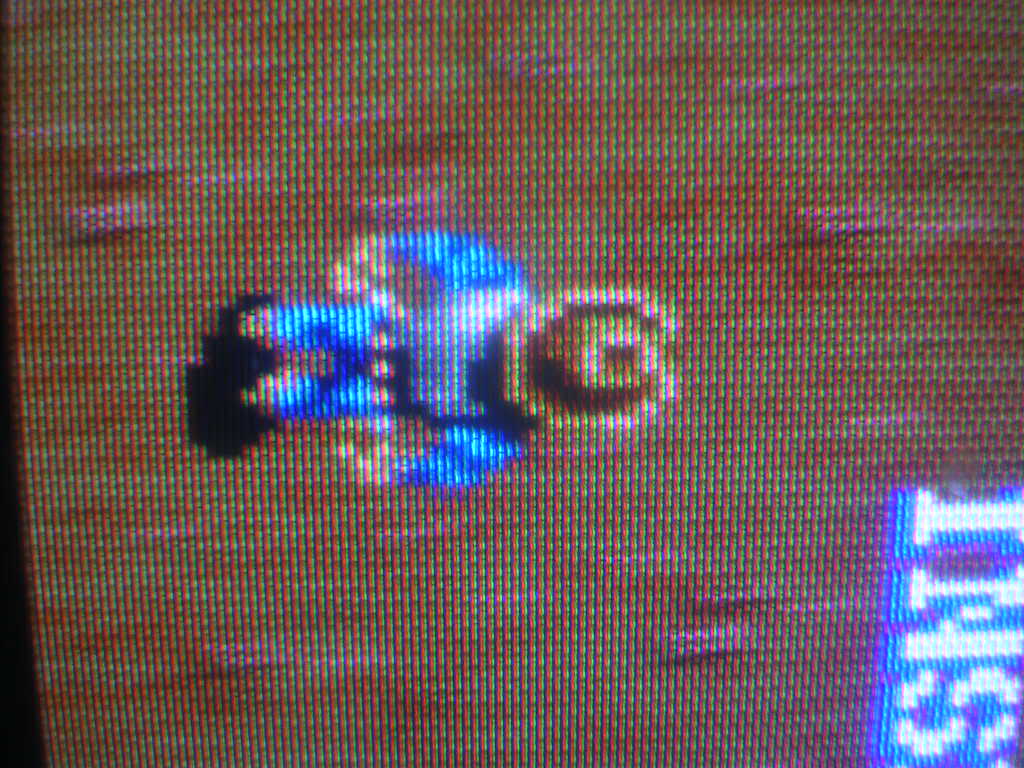 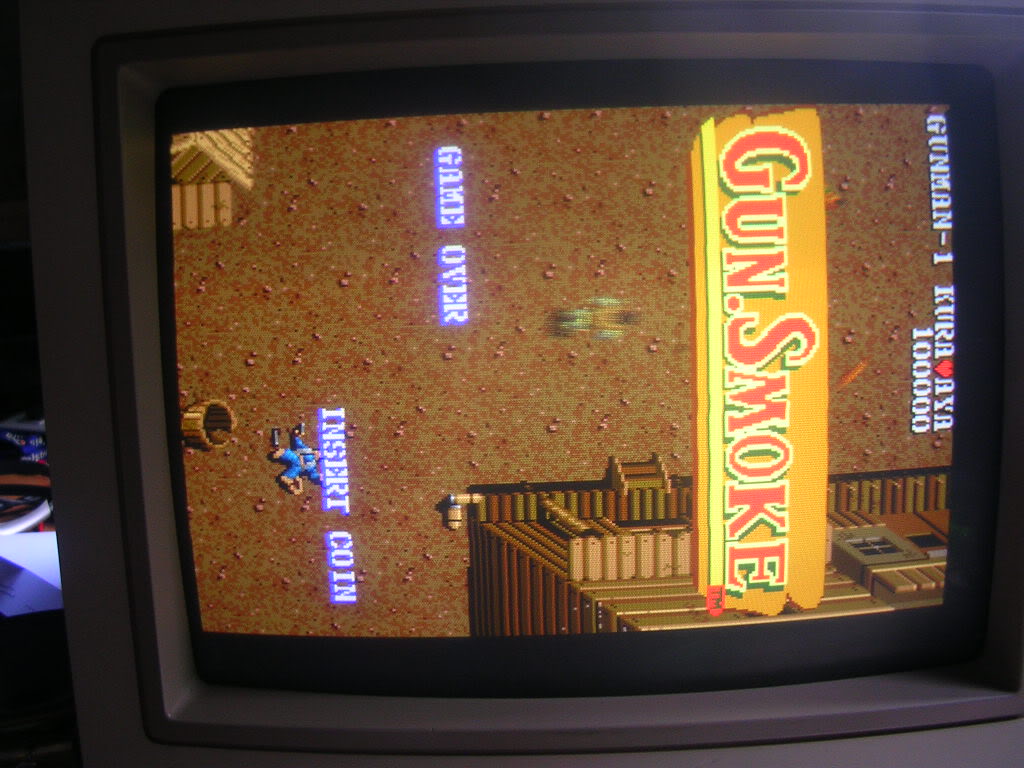 Other than those two faults the board was fine, a bit dusty but otherwise none the worse for its narrow escape from the rubbish truck. Oh and it seems the bootleggers put their names into the high score table so that could be fixed with a ROM reprogram, but I probably won't bother.